Armor in Ghost of Tsushima (GoT) grants defensive properties and customizes Jin's playstyle, as well as his appearance. Players can equip various types of armor, such as equipping light armor will allow Jin to play as a stealthy ninja and makes his movements light and fast. While choosing to wear medium to heavy armor grants higher defense properties but projects heavy but slow attacks. Armor is divided into three categories: Helms which are head armors that consist of hats, baskets, hoods, and helmets. Masks which conceals Jin's face, and Body Armor. This page covers a list of all the armor that can be found in the game.

Samurai armor that has been damaged beyond repair.

Perfect for those with a long journey ahead.

Sturdy armor that once belonged to a son of Lady Masako

Armor that once belonged to the legendary archer Tadayori

For the leader of the Sakai clan. Previously worn by Jin's father, Kazumasa Sakai

Belonged to a Straw Hat infamous for his cunning and deception

A gift from Taka to enhance the tactics of the Ghost... And a good friend's final creation

Armor specially designed to be worn by Khotun Khan

"A true samurai needs no clothes."

-Jin Sakai after too much sake 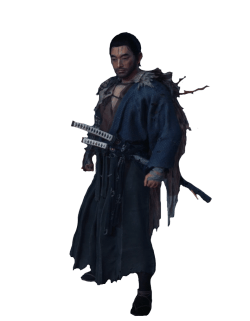 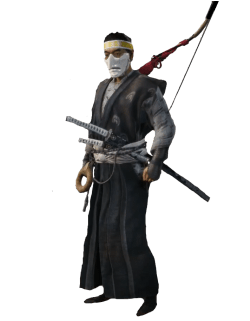