Helms in Ghost of Tsushima (GoT) is an armor piece used by Jin Sakai that is worn on his head. Helms are presented in various types such as hats, baskets, helmets, and more, these provide defensive properties and different perks, also, it is a cosmetic item that changes Jin's appearance when it is worn. Helms can be found in settlements, purchased from Merchants, obtained as a reward, or crafted with the use of certain Resources. This page covers a full list of all the helms that can be found in the game.

The will of a warrior is timeless and untouched by death

Optimism in the face of adversity is the samurai spirit.

Whispers through the trees. Protected from the harsh sun. A sturdy defense.

It may have seen better days, but it has lived a full life.

For the leader of the Saika clan, Previously worn by Jin's father, Kazumasa Sakai.

Hallmark if the samurai of the Sakai clan.

For the leader of the Saika clan. Previously worn by Jin's father, Kazumasa Sakai.

The headband of Tsushima's legendary Ghost.

Headband of the Invasion

Calm before the storm. Overtaking all it sees. Reaching from within.

Brillant it blossoms. Struggle and cry out for help. Weakend from the fight

A golden temple. Darkness fades in brilliant light. We rise together.

Pure heart and soul. A lone pebble alters fate. Rising from the dephts.

Watching over all. Gently cleansing, stand refreshed. A new beginning.

Whispers through the trees. Protected from the harsh sun. A sturdy defense.

Stading amidst death. An unknown world teems with life. Once a grander sight.

Banded together. Fear of waht's lurking beneath. Protected from hate.

Holding ever fast. Reveal the inner weakness. Pushing to the goal.

A jorney awaits. A welcome escape from all. Wash the fear away

Shattered and hopeless. A remnant of our failure. Broken and consumed.

A trophy taken from the Straw Hat duelist Kojiro.

Only those with worthy ambitions may wear this headband.

Refreshing as a sea breeze in summer.

Preferred by those sow confusion and fear in the ranks of their enemies.

Preferred by those who sow confusion and fear in the ranks of their enemies.

Worn with pride by the samurai of Tsushima.

Worn with pride by the samurai of Tsushima.

Worn by wanderers whose first duty is mastery of the blade.

Favoured by farmers and those who support them.

Keeps the rain off your face and the sun from your eyes.

Last worn by a childhood friend... and a traidor to Tsushima.

For Those who walk the lonely forests and bogs of Tsushima.

Band of the Second Son

The colours of a warrior from a distant time and place.

Worn with pride by those who work the famous forge of Komatsu.

Cherished by healers of Akashima.

Handcrafted in the northern town of Sago, famed for its dyes.

Gosaku's helmet gave rise to his nickname, the Tiger of Tsushima.

A trophy taken from the Straw Hat duellist Kojiro.

A trophy taken from the Straw Hat duellist Kojiro.

The warrior's mind is quiet but alive, like rustling bamboo.

Worn by the keepers of Tsushima's legends.

Imparts the fury and cunning of the tiger to its wearer.

Dyed the shade of a venomous snake, so beware the wearer's bite.

As day gives way to night, blood and fire to follow.

One day peace will return to Tsushima, like a cool night breeze that rustles the plum trees.

For a warrior who strikes from the depths of unknown darkness.

Imbued with the mysterious power of the Imperial court.

Slowly overwhelmed. The mind recalls the teachings. Fight through the darkness.

Favoured by those who haunt Toyotama's marshes.

A poor, humble traveller... or a deadly warrior.

For the ronin who flourshes amid the fires of war.

The wandering warrior who brings terror to evil spirits.

The power of darkness and shadow. 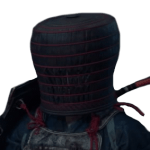 In the dance of death, the eye moves slower than the blade...

The death of friendship cast a long shadow...

The deep red stain of treachery can be avenged, but never cleansed... 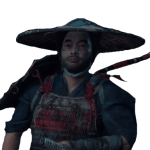 The master bladesman dances with the grace and beauty of the koi. 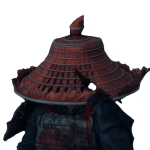 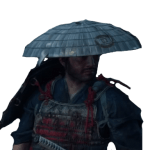 Lit by the sun, the blinding radiance of death itself approaches... 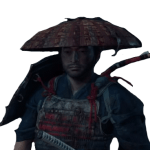 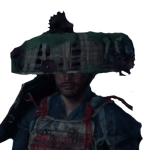