Lore for Ghost of Tsushima (GoT) covers information regarding the setting, and world that the game is in. This page features the backstory and elements that add depth and richness to the game. In Ghost of Tsushima, players take on the role of a surviving samurai warrior named Jin Sakai. Players will have to venture Tsushima Island and learn unconventional methods and become the Ghost of Tsushima to fight against the Mongol Empire and to take back the island. 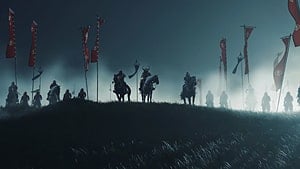 In the year 1274, a Mongol fleet led by Khotun Khan has arrived and invaded the island of Tsushima on Japan. The story begins with Jin Sakai and his uncle, Lord Shimura, marching into the front of Tsushima's warriors and defenses, preparing to repel against the invasion. Lord Shimura then sends his right-hand, Harunobu Adachi to send a warning to the invaders, but is later beheaded and killed by the leader itself, Khotun Khan. 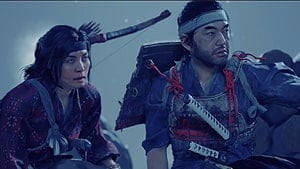 Tsushima's forces then push through and start to attack and the battle ends in a disaster with the army slaughtered on the battlefield, Lord Shimura who has been captured by the Mongols, and Jin who is left wounded and on the brink of death. As it looks out to be a catastrophe, not all hope is lost since Jin awakens outside a village and is nursed back to health. He then meets a local thief named Yuna who tells him that the majority of Tsushima has fallen under the hands of the Mongols. 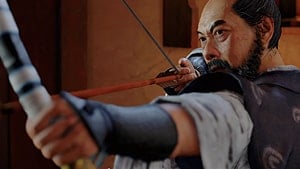 Jin, along with Yuna, tries to storm Castle Kaneda in an attempt to rescue his uncle, Lord Shimura, but is defeated by Khotun Khan himself and thrown off a bridge. Realizing that he needs a plan and that he cannot do it alone, he seeks out Yuna and finds allies such as Ryuzo his friend and leader of the Straw Hat Ronin, Kenji, a mischievous merchant, Lady Masako a strong female warrior and who is also the wife of Harunobu Adachi, Sensei Ishikawa a master archer, as well as rescuing and recruiting Yuna's brother, Taka who is a skilled blacksmith. 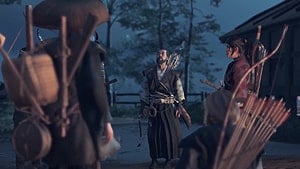 As Jin sets forth on his journey of bringing his allies together, he begins to disrupt the schemes of the Mongols, and liberating camps and areas, thus the locals then refer to Jin as the "Ghost". As preparations are set to infiltrate Castle Kaneda, Jin officially starts the mission of rescuing his uncle, Lord Shimura. Jin, along with his allies, Yuna, Masako, and Ishikawa infiltrate the castle, Jin runs into Ryuzo who betrays him and now serves Khotun Khan. His mission? Is to kill Jin and bring his head to the Khan in exchange for a handsome bounty reward. As unfortunate as it sounds, Jin is able to fight against Ryuzo and the Mongol forces, reaching Lord Shimura and is able to retake Castle Kaneda. 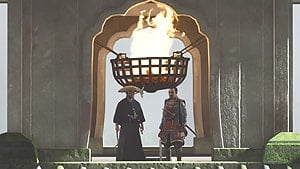 Despite their first victory, the Khan was still able to escape the premises with the help of Ryuzo and his men. With some parts of the region of Izuhara being free from the Mongols, Lord Shimura and Jin continue their plan to fight against the Mongol forces by retaking Shimura Castle. Jin then recruits Norio who is a noble warrior monk, along with the rest of the monks, as well as the Yarikawa clan. As their plan goes smoothly, Lord Shimura has created a new army under his command, as well as receiving reinforcements from the Shogun who is now on their way. Jin, on the other hand, returns to his home to recover the family's ancestral armor, and seeks the aid of the family's caretaker, Yuriko to teach him how to craft poison. 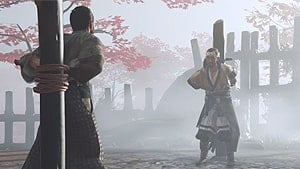 Jin then tries to confront Ryuzo but is later on captured by the Khan along with Taka. They are both forced to surrender and later, Taka is forced to kill Jin who tries to fight back and is killed by Khotun himself. Jin is then able to escape the Mongol camp with the help of Yuna, and just as Shogun reinforcements arrive, Lord Shimura commences the full assault on Shimura Castle. The Khan himself then uses a tactic that resulted in multiple casualties of Shimura's army, while Jin defies his uncle and comes up with a plan to poison the Mongols in order to lessen the deaths of their people who are fighting. 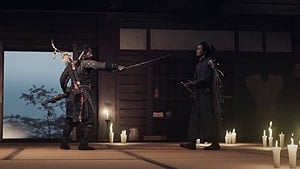 Jin begins to infiltrate the castle and tries to poison the Mongols' food. But as he is able to do so, he runs into Ryuzo once again, fights him, and ends up killing his old friend. Shimura and Jin were able to retake Castle Kaneda but the Khan has yet again fled the castle and proceeded north. In spite of retaking the castle, Lord Shimura begins to become furious with Jin for not honoring the code of the Samurai and blames Yuna for influencing his "unconventional" methods. As Shimura knows that the Shogun will want to have someone executed as punishment, he asks Jin to put the blame on Yuna and demands her to be executed, but he refuses and fully embraces his new identity as the Ghost of Tsushima. Shimura then leaves Jin with no choice and ends up arresting him for his "crimes". 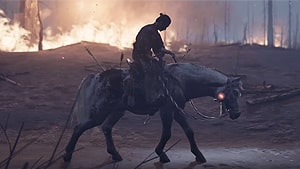 Jin still manages to escape with the help of Kenji and Yuna and continues to track down Khotun Khan. Jin then discovers that the Mongols were able to recreate the poison that he used in Kaneda and is now planning to use it against the people of Tsushima to take them out and fully take control of Tsushima. 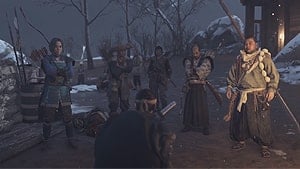 Jin then quickly gathers his allies and commences the final assault against Khotun Khan's stronghold in Port Izumi. Jin, with the help of his allies, was able to infiltrate the port, defeat the Mongols, and kill Khotun Khan himself. 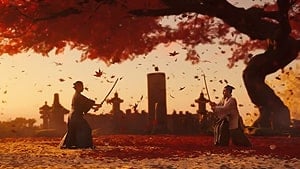 With the Khan dead, the remaining Mongols on the island are killed and the invasion begins to lose its drive. Jin then is summoned by Lord Shimura who tells him that he (the Ghost) is now considered as a threat to Tsushima, that he is no longer a part of the Sakai Clan, and is ordered by the Shogun to be executed. As the two meet in serenity, Shimura and Jin reminisce about what they both achieved and lost and end up fighting each other. Jin, of course, emerges as the victor of the duel and is given the option of either killing or sparing the life of Lord Shimura. Either way, Jin accepts his new fate as the Ghost of Tsushima and lives the rest of his life as both a vigilante and a wanted man.