Enemies in Ghost of Tsushima (GoT) features a compendium of hostile characters in the game. In Ghost of Tsushima, players will travel the island of Tsushima where you'll encounter the forces of the Mongol Empire, as well as hostile animals. Successfully killing enemies provide various drops that reward players with items they will need as they continue to progress through the game. The enemies Jin encounters in the game are Bandits and Mongol soldiers.This page covers a list of all the enemies encountered in the game which includes their location, attributes, item drops, and more on each individual page that is linked below. 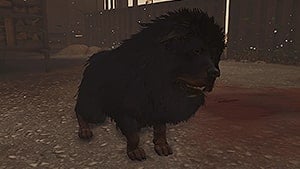 These dogs are hostile and are usually seen in Mongol forts, camps, and settlements. They are quite agile and only has one unblockable bite attack where they grab Jin's arm, which stops Jin's movements for a brief moment. 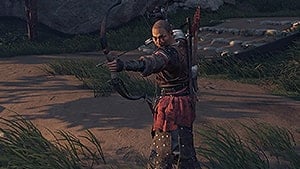 Archers are commonly encountered in both a group of bandits or Mongols. Although they are the easiest to kill, they are considered to be the fastest enemy encountered since they can shoot up to two arrows in succession that can damage and stun Jin momentarily. 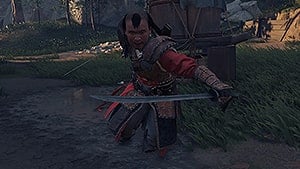 Common enemies encountered by Jin on the island. Apart from Mongol forces, players will also come across bandits and ronin swordsmen. This enemy is fast and aggressive. 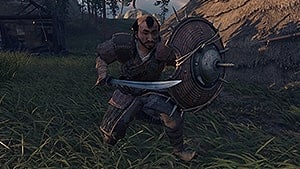 Jin can come across bandits or Mongols that wield a shield and sword. They can block his melee and ranged attacks, and they are capable of pushing players back with their shield. 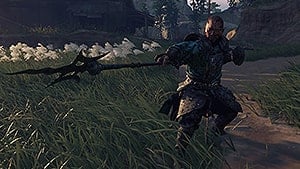 The spearmen can either be encountered as a Mongol soldier or a bandit. Spearmen are capable of executing long piercing and sweeping attacks. 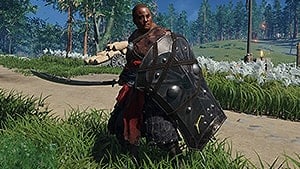 Brute Warriors appear as either a bandit or a Mongol soldier. Players can easily identify a brute just by looking at their appearance. They are bigger compared to the regular-sized soldiers/enemies and they usually wield larger, heavy, bludgeoning weapons. 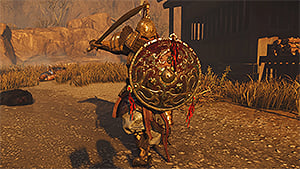 A Mongol Warlord can easily be identified from their appearance. Mongol Warlords are heavily protected with a gold plated set of armor from head to toe. Mongol Warlords differ from one another when it comes to combat, some can be seen wielding two swords, some fight with a spear, while the others wield a shield and sword.